The habitats of the Solway Coast Area of Outstanding Natural Beauty are a haven for some reptiles and amphibians.

There is one stand-out example of a rare species which has made this area its home – the natterjack toad. More than 10% of the total British population lives here, the creature’s most northerly outpost.

The natterjack is easily identifiable thanks to the yellow stripe on its back and the fact its short back legs mean it runs rather than hops.

The Solway Coast is perfect for it as it likes to live at sea level, on dunes, saltmarshes and heathlands, with sandy sites for burrowing and warm shallow pools for breeding. The males call to the females from their chosen pond with a distinctive rasping sound which can travel up to a kilometre on a still night.

This area is also a haven for adders, Britain’s only venomous snake, which basks in the sunshine on the dry paths and boardwalks of our nature reserves,and hides on the heathlands. They hunt lizards and small mammals, as well as ground-nesting birds. Don’t be alarmed but do be aware, they are not aggressive and will avoid you given the choice, just keep your eyes open and keep dogs on a short lead.

The Solway Coast Area of Outstanding Natural Beauty can also boast another rare species – the great crested newt. Its numbers have suffered nationally in recent decades as its pond breeding habitats and food supplies have been lost. It is now protected by law.

Smooth newts, also known as the common newt, is another variety of amphibian also seen here, as are common lizards, the UK’s most widespread reptile species. Again look out for them basking on the boardwalks across our bogs. 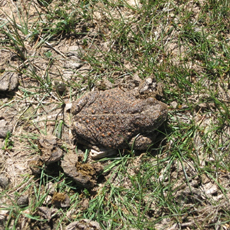 More than 10% of the total British population lives here.

Easily identifiable thanks to the yellow stripe on its back and the fact its short back legs mean it runs rather than hops.