Milefortlet 21 is a fascinating spot on the Solway Coast Area of Outstanding Natural Beauty.

It’s located just off the coast road, just over the brow of Swarthy Hill, overlooking the area’s historic saltpans.

This was a key part of the Roman’s defences and it was excavated in the early 1990s and  its turf banks rebuilt so you can get an idea of the scale of the structure which once stood here.

When Emperor Hadrian visited the boundaries of the Roman Empire in 122AD, he ordered the building of border defences on a massive scale.

Hadrian’s Wall was his finest achievement and is a testament to the might of the Roman Empire. However, contrary to popular belief, Hadrian’s Wall did not solve the Romans’ problem of border security.

In areas like West Cumbria the armies had a particular problem – the open coastline was in very close proximity to the border with Scotland. It would take little effort for their enemies to bypass the Wall and raid the Cumbrian coast.

To combat this weak link in their defences, the Romans built a series of milefortlets, which linked with Hadrian’s Wall. These were interspersed with small towers, though, unlike Hadrian’s Wall, they were not connected by a continuous stone or turf barrier.

The full extent of Roman defences along the Solway Coast isn’t really known. There are remains of milefortlets between Port Carlisle in the north and to the south near Maryport.

There were also some larger forts and garrisons in the area, most notably in the town Maryport, which boasts some of the most exciting archaeological finds in Britain. Visit the Senhouse Roman Museum to see some of them in all their glory.

Yet the usefulness of the border defences didn’t last. Emperor Hadrian reigned between 122AD and 140AD, after which time the West Cumbrian milefortlets appear to have been abandoned. 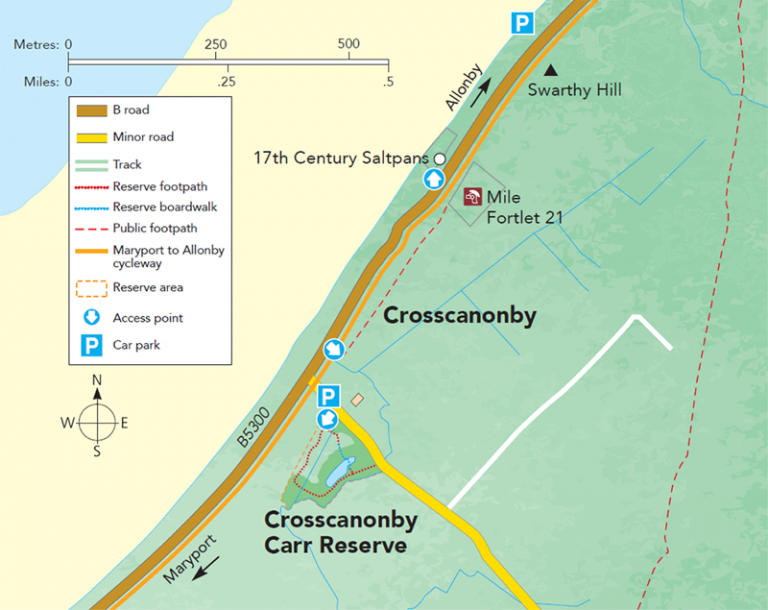 Milefortlet 21 is sited just off the brow of the hill. This could be due to the Romans’ insistence on placing the fortlets exactly one Roman mile apart, rather than moving the site 20 yards for the best possible views across the Solway.

Milefortlet 21 is north of Maryport and south of Allonby on the B5300. Parking is available in lay-bys at the side of the road.