The issue of renewable energy production is one that divides opinion, though one thing is for certain – changing climates and rising sea levels are a key threat to the Solway Coast Area of Outstanding Natural Beauty into the future.

Wind is the most common energy-creating asset around the Solway – that’s why both the sea and the land around the AONB have become popular locations for wind farms. Individual and small groups of turbines have been erected in several locations along the coast, though none match the scale of the one which sits in the Solway Firth.

Robin Rigg Wind Farm was built by energy company E.ON, opening fully in 2010. Though it sits in Scottish waters on the Robin Rigg sandbank, it is easily visible from the English side of the estuary.

The wind farm has 60 125-metre high turbines and an off-shore substation, and provides enough power for around 117,000 homes.

It is operated out of the Port of Workington and undersea cables bring the power back to shore at Siddick beach, just north of the port. Around 40 staff are employed by the company.

Solway Coast writer Ann Lingard wrote an interesting piece about the windfarm that you can read here.

In addition to wind, Dryholme Farm in Silloth is home to an anaerobic digester which processes feedstocks grown locally and produces a biofertiliser for use on agricultural land in addition to the power it puts into the National Grid.

There have been suggestions that the Solway Firth could use a tidal barrage as another means of energy generation.

One set of proposals planned to erect a pedestrian bridge which was fitted with turbines to create power as the tides ebbed and flowed.

Another proposal was for a tidal gateway, accessible to vehicles, running from Workington in Cumbria to a location close to Kirkcudbright in Scotland. A third idea has also been proposed for a tidal lagoon stretching from Allonby Bay in the Solway Coast Area of Outstanding Natural Beauty down the Cumbrian coast to Workington.

No firm plan is currently in place to generate energy from the Solway Firth’s tides. 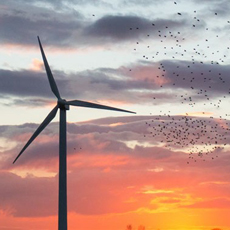